In this section we are going to look at simulating the movement of the water surface. We model the surface as a 2D grid of particles. These particles then form the basis of a mesh by rendering triangles between them.

A particle is modelled as a point in space with a mass and velocity vector. Each particle is connected to each of its immediate eight neighbours. That is four to the left, right, in-front, and behind, then the diagonals. These connected particles all apply forces to each other as though a spring connects them, this virtual spring wants to keep the particles spaced apart but not too far apart - that is there is a configured resting distance between particles, any deviation from this distance creates a correcting force proportional to the deviation. The effect that this has is that any movement that one particle has propagates through the network of particles. In addition to the forces between particles we need to introduce some damping. This absorbs energy from the system and brings it eventually to stasis. The effect of these forces combined is to create a realistic looking water surface. 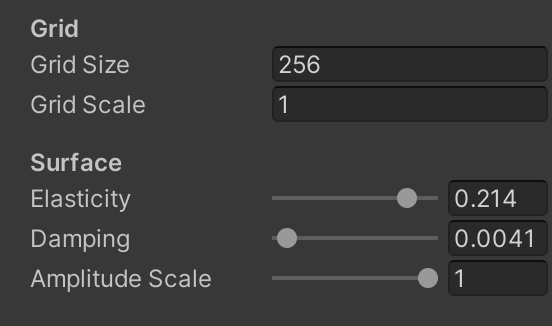 Once we have the simulation of the surface we need to put some energy into it to make it move. We do that with a configurable impulse function. This creates smoothed impulses of a configurable radius. I’ve added lots of other parameters too to vary the density and shape of the impulses. 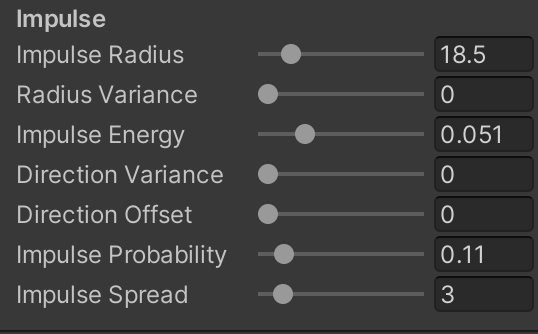 The whole process is implemented as multiple stages of compute shaders and can easily manage a surface with 1024 x 1024 - 1 million points at good frame-rates on the reasonably modern Radeon Pro 560X in my laptop. For most uses it isn’t necessary to have such high resolution, and we will be needing some spare capacity for what comes next.

A repo containing the full Unity project we are using in this tutorial is available on GitLab. The Scene with the setup described in this section is JustLiquid.unity.

Simulating water has been a nerdy hobby of mine for a long time now. My first attempts were on the game Downstream Danger back in 1985. There were a few pre-defined animations for waterfalls and streams. In 1999 I got into DirectX and 3D games development on Windows. I started a game with the working title of Microcosm, but unfortunately I never got it completed. It had landscapes comprised of fractal mountains with simulated erosion.
Published Feb 11, 2021  3 min read   unity · simulation · graphics

I’ve had a horrible ray traced pebbly beach scene framed on my wall for a long time now that I really wanted to redo. I’ve used a bit of free time at Christmas along with a major new release of Cheetah3d to do that. Here are a few of the things I created.
Published Dec 29, 2017  1 min read   graphics