I’ve had a modest home aquarium for a many years. It has always been lit by a specialist aquarium fluorescent tube. This gave out a nice light which both helped plants to grow and counteracted the excess of green caused by plants an algae.

There were two problems with this fluorescent lighting solution however. Firstly, it switches on and off instantly which can be quite unnatural and startles the fish. Actually switching on is worse, the fluorescent starter causes the lamp to flicker whilst starting. Secondly fluorescent lamps and not as efficient as LED, and given that the lamp remains on for up to half the day, that’s a lot of wasted power.

In the last few years LED technology has improved greatly. LEDs are two times more efficient than fluorescent. Last year I purchased some RGB LED strips with a driver that could be remotely controlled. It allowed fine control of red, green and blue channels to create subtle colours that I hoped would be suitable for the aquarium. 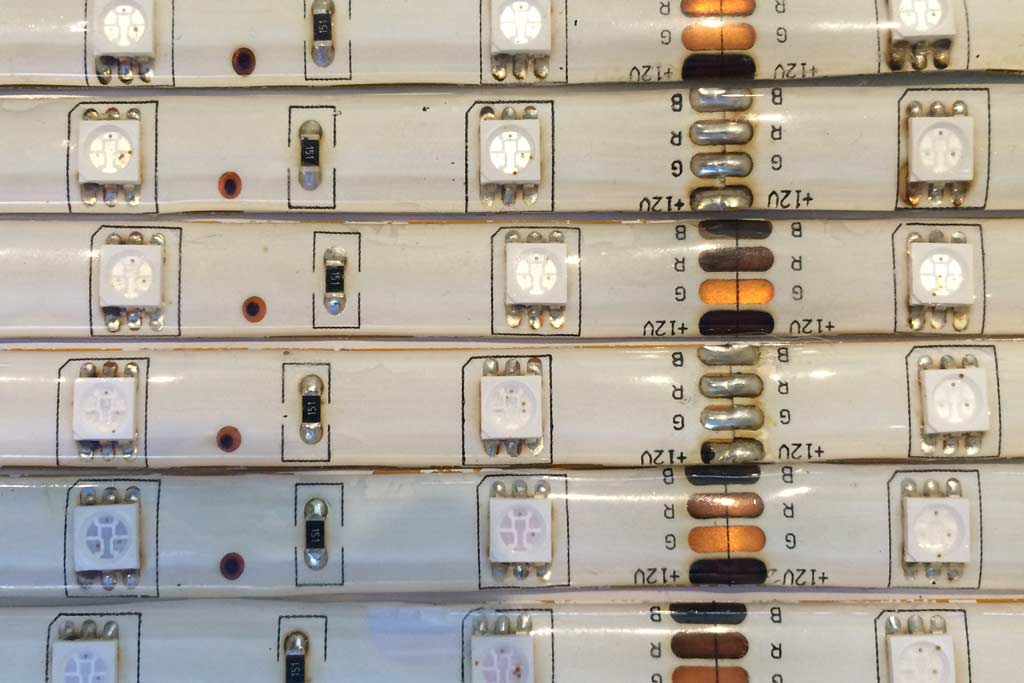 The reality of these strips is that they are useless for the aquarium. They are fine for producing vivid primary colours but for subtle whites they just don’t cut it. See my previous rant for more information - in summary: I ended up building a spectrometer.

I’ve had the idea of simulating the natural daylight cycle for a while now. However it’s only recently that all the parts needed have become available at a reasonable price point.

In particular I needed a low cost wireless micro controller - step forward the Particle Photon. This great little device is easy to program via a web based IDE, it can be remotely flashed over WIFI. It’s pretty compatible with Arduino but has more storage and processing power. Also it’s very cheap - only £18.

I have also been looking for some suitable LEDs. When I saw these EPILED and Bridgelux LEDs that cover a wide range of wavelengths my problem was solved. These discrete LEDs cover the entire spectrum from ultraviolet to infrared.

I’ve evolved this design a little bit whilst building it, however the basic premise remains: a self contained lighting control which can simulate natural lighting whilst giving out suitable wavelengths to promote plant growth.

The design features six channels of light with 10 LEDs in total rather than the more usual three - red, green and blue. These channels are:

Quite a bit of thought and experimentation went into this choice of channels. As I said previously, I wanted to simulate the natural daylight cycle. This meant being able to produce natural full spectrum daylight but also transition this through sunset into dusk and moonlight. (Ok deep blue moonlight is not natural but it looks good and feels right.)

Also I wanted to be able to optimally create the right wavelengths for photosynthesis and plant growth. The deep blue, deep red and IR LEDs produce wavelengths that most regular LEDs don’t. These are pretty close to perfect for plant growth as well as highlighting pigments in some fish.

The EPILED and Bridgelux LEDs require to be powered by a constant current driver. This means that the voltage supplied to them must be tuned so that the current passing through them remains constant - 700 milliamps. The voltage needed to create this current varies as the LEDs warm up as well as over the lifetime of the LED. Pulsing the LEDs on and off very fast creates the effect of dimming, a method called pulse width modulation (PWM.) The driver modules I found allow for dimming via PWM whilst maintaining a constant current.

Initially in my design the PWM was provided directly from the micro controller. However the Photon is only capable of 8-bit control. Due to the non-linear perception of light levels this leads to the jerky fading of the LEDs at low illumination levels. The PCA9685 module provides 12-bit PWM for 16 channels and is decoupled from the CPU so it can run with a constant frequency up to 1600Hz. It also has, I think, a rather thoughtful feature of allowing you to offset the pulses on each channel. This allows you to smooth the power draw rather than each channel transitioning at the same time.

Construction is pretty straightforward as it’s just a matter of connecting together the pre-built modules. The only part you really have to be careful about is following the instructions regarding fastening the LEDs to the heatsink correctly. Without proper heat dissipation they won’t last too long. 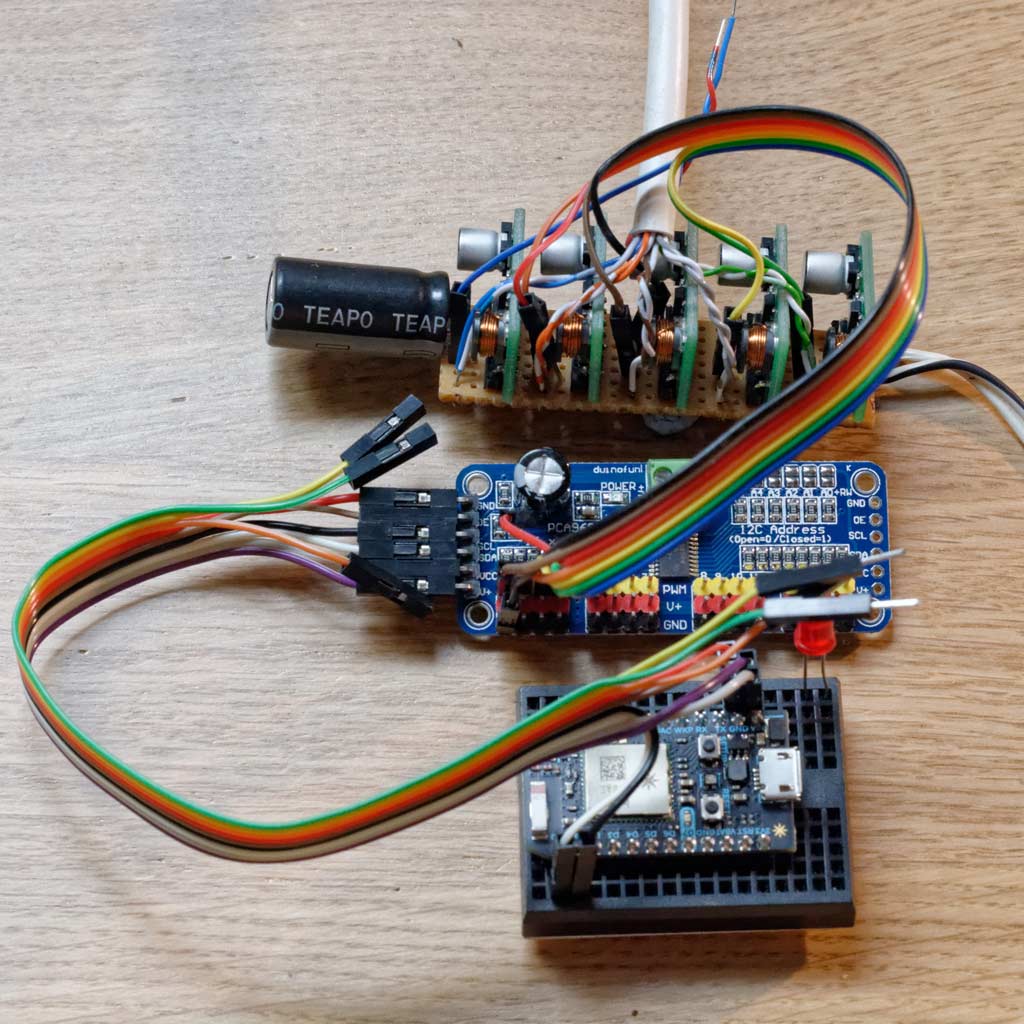 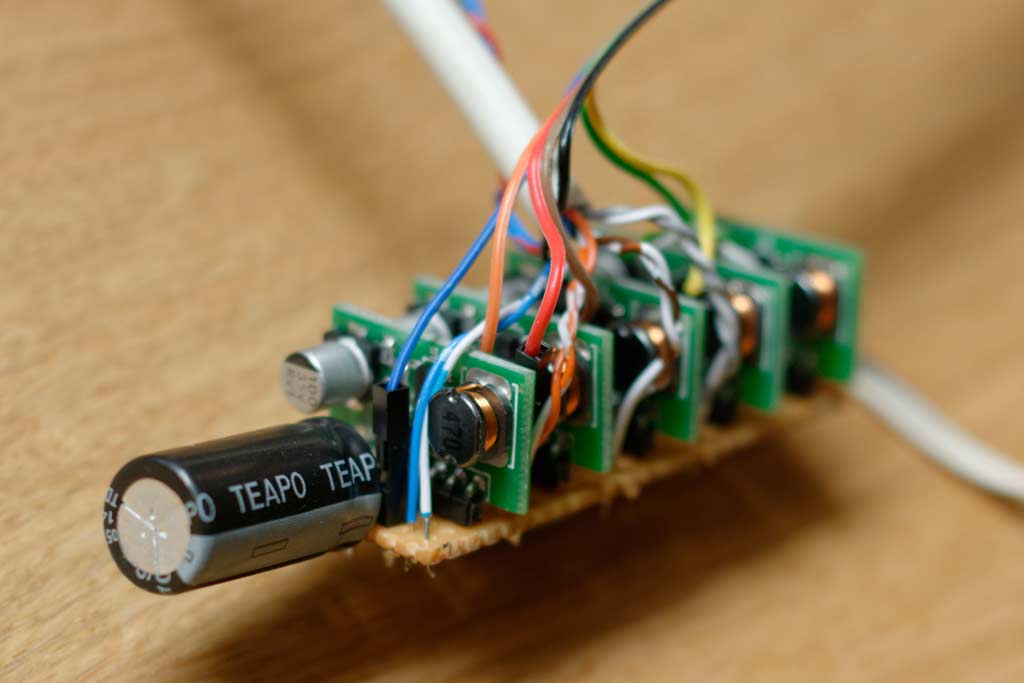 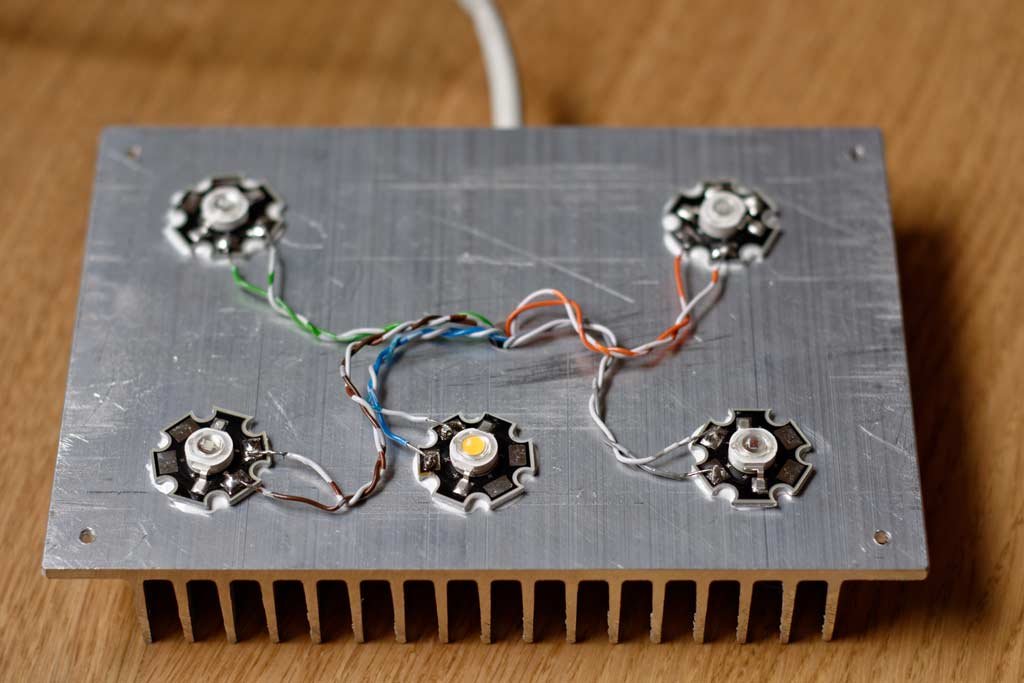 The easiest way to put code onto your Particle Photon is to use build.particle.io. I’ve put the source code up on https://github.com/tonbut/PhotonAquariumController. Copy the aquarium.ino, Adafruit_PCA9685.h and Adafruit_PCA9685.cpp files into a new app.

This code also contains a couple of additional features that you can easily comment out. It contains code to read two temperature sensors, one for inside the tank (a DS18B20) and one outside (a DHT22.) Also I’ve attached a light dependent resistor (LDR) to give a feedback loop so I can know if something goes wrong - I really don’t want the lights on all night.

The controller currently runs for a fixed 24 hour schedule defined in the parseSchedule() function. You should edit this function to suit your needs. It defines a set of times along with a colour value for that time as a CSV string. When the time moves on and into a new colour the colour of the lights smoothly transitions over a 5 minute period.

The time is in the format is HH:MM. The colour format is a hexadecimal value similar to the way colours are specified on websites - obviously, however, with 6 channels rather than the usual 3.

There are a couple of other columns on each row. These are currently unused. (I wanted to have multiple schedules defined, for example for when no-one is at home. I also experimented with a weather feature - see below.)

The particle cloud provides an easy secure way to access the Photon controller. You can readily expose variables to be read and functions to be called. The code on GitHub provides a few APIs:

There is still more experimentation and playing to do here. Some commercial controllers seem to do things like lightning strikes.

The lighting controller is working pretty well. I’ve got an excess of light output with 10 LEDs, so the current schedule only uses about half brightness. When running at this level the heatsink gets to about 40°C. This is pretty safe and could easily work much hotter - the LEDs are rated to 60°C.

I’m really pleased with the quality of the light output - I can achieve perfectly natural colours. Experimenting with the transition to night has been fun too. The lights gradually warm to yellow light and then to a deeper red before falling away to leave a deep dark blue of dusk. Finally this fades away to night. 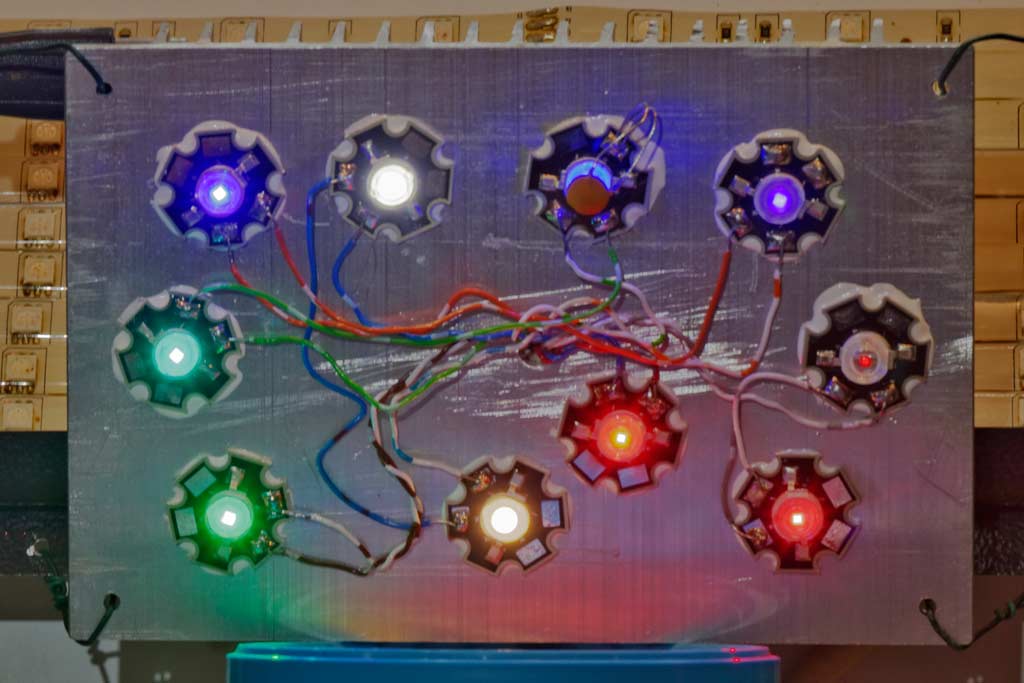 - using a Raspberry Pi for less than $50

This project promises to give you super-human powers. I still find it amazing that our eyes construct all the colours for the most part1 from the mix of red, green and blue that the cones in our eyes can detect. Despite this simple three valued approach to colour that pervades our eyes, cameras, monitors and computer graphics there is a deeper reality to colour in everyday life. This projects opens the door on that reality.
Published Jun 22, 2016  8 min read   internet of things · sensors

Whilst getting things off my chest I thought it’d be a good idea to mention comb9.com! Comb9 is a consumer integration platform which I built in 2015. By consumer integration I mean it allows consumers of internet of things gadgets, social media and online services to integrate this disparate capabilities together to build new combined1 services which do more than the sum of their parts. Background Of course this idea is not new.
Published Jun 15, 2016  3 min read   internet of things · comb9

I’m not really sure why it’s taken so long but I’d like to introduce Polestar. I actually first started the project back in 2014. I got a couple of early adopters in January 2015. Since then it’s been used quietly without much fuss with a few updates along the way. Background I got the idea for Polestar at the 2014 Good Things conference in Bath, UK. I noticed a repeating pattern from the speakers - a kind of reference Internet of Things architecture.
Published Jun 14, 2016  5 min read   internet of things · polestar · sensors