I’m not really sure why it’s taken so long but I’d like to introduce Polestar. I actually first started the project back in 2014. I got a couple of early adopters in January 2015. Since then it’s been used quietly without much fuss with a few updates along the way.

I got the idea for Polestar at the 2014 Good Things conference in Bath, UK. I noticed a repeating pattern from the speakers - a kind of reference Internet of Things architecture. This architecture had 4 levels:

I made the connection between this architecture and the work i’d been doing with my home monitor project. Actually there was a disconnect. These reference architectures made the cloud services the predominant part. There are reasons for this:

My home monitor project kind of merged the hub and cloud services concepts. There are a few good reasons for this too:

Of course cloud services do have their place and I feel the trend will be towards cross-vendor integration products such as Comb9 and IFTTT.

My original home monitor was hand crafted and specific to the sensors and actuators that I had. It had a fixed database schema for storing data and fixed code for reading obtaining the sensor values. It did have the concept of scripts that could be edited through the UI. These scripts could be used to generate visualisations of the data. Also they could be run at specific periods to implement custom actions on actuators that were coded into the application. An example of this was a script that turned by heating on and off dependent upon an algorithm that used who was at home, time of day and temperatures at various locations.

Being hand crafted is was a burden to experiment with novel technologies or automation ideas. Basically most things involved coding in an IDE and then uploading the new code to the server - which was and still is an old laptop in the loft.

What I wanted was an abstraction that was generic, that would have no specifics to my particular usage and which could be configured to work for anybody or any situation that required. Further than that the customisation could be done remotely through a web interface.

The first problem to solve was data persistence. By using a NoSQL database I was able to easily store the core time series data of the abstraction with new values added and taken away at anytime. I chose MongoDB. MongoDB could also store custom collections dynamically if needed.

I extended the concept of scripts to make them event driven. Events could sent periodically or when sensors changed value. In addition scripts could easily call each other for modularity. Scripts have access to both real-time as well as historical sensor values. In addition they can store state between invocations.

Scripts written in Groovy language. Groovy is a superset of Java and is byte-code compiled dynamically so it is very efficient.

Sensors are defined by a special script. Sensors themselves are just named values. They are only updated by scripts which can periodically poll or be triggered by outside events. Sensors can be numeric, boolean or vectors of the above. Scripts can also be updated to be in an error state. Notification scripts can be triggered when errors occur.

Realtime sensor values can be viewed on the sensors page. Historical values are show as tickers with configurable period (default 24h). Sensors can be filtered by tag or name. 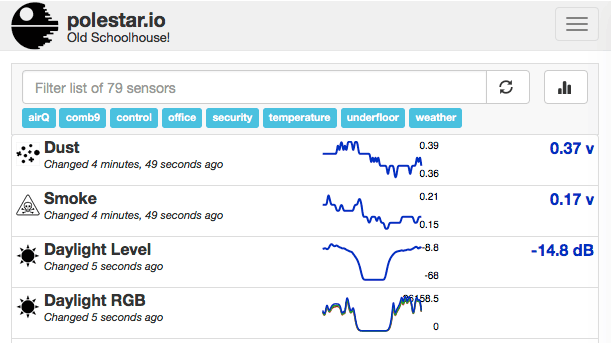 Scripts can be created and managed on the scripts page. You can filter by trigger actions, keywords or name. You can also reorder and execute scripts here. 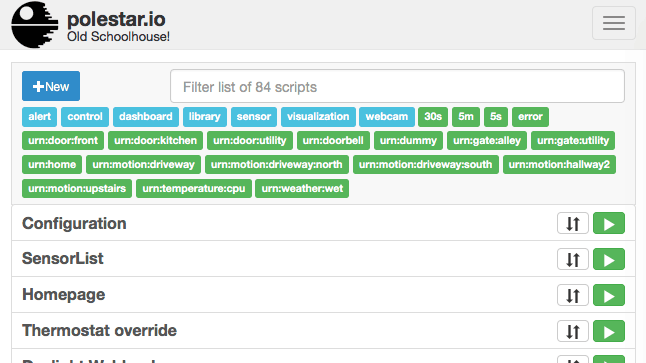 Scripts be can edited to specify triggers, set their access control and to change their Groovy source code. Access control levels are: 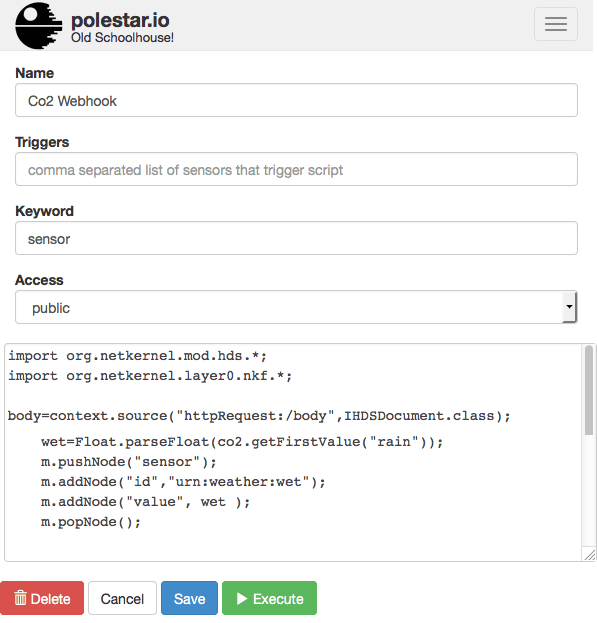 Polestar has an internal log which scripts can write to.

Polestar is a NetKernel module. I host it on an old laptop running Ubuntu but it will easily run on a Raspberry Pi. I expose it over HTTPS from my home router with dynamic DNS.

This simple set of functionality is all that is needed to provide a flexible and dynamic internet of things hub!

- with a Raspberry Pi

There is a major update to this article, please see this later post Radar Speed Camera Rebooted. I’ve always been interested in connecting things up to computers that they were never designed for. I could reminisce about my first drawing capture arm that used captured the two joint angles with potentiometers and used them to control the pulse width oscillators that fed into the cassette input on a ZX Spectrum.
Published Mar 31, 2015  6 min read   internet of things · polestar · sensors