Since that post we have released the first version of Lang/SCXML urn:com:ten60:netkernel:lang:scxml into the Enterprise Edition repositories. If you want to have a play with it yourself here are the steps:

State machines are an approach to modelling and implementing systems that are event based. Events are analogous to requests in resource oriented computing however events don’t have responses - you might say they are fire-and-forget. Often in programming, state of system is scattered across a number of variables and flags and the logic to determine a particular circumstance and then what to do may end up quite convoluted making testing and evolution difficult. In a state machine the essential state is captured by a single variable called “current state” (this is actually a simplification but you get the principle) which can only take on one of a predefined set of values. The current state can only change when an event is received and a transition is defined that the state machine is expecting- corner cases become explicit. State machines are often visualised as graphs. 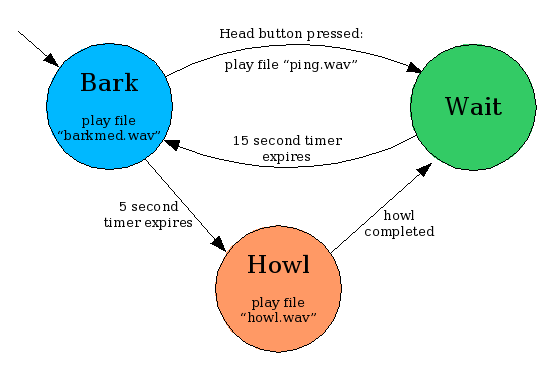 An SCXML document requires a root scxml element with default namespace. It is also worth declaring the namespace necessary for issuing sub-requests:

Following the example visualized above we can now look at how transitions are added between the three states. Transitions are defined within a state and define a target state to go to when an event is received.

Executable content is the scxml term for configurable actions that can be executed at certain points. The can be executed when we enter a state, exit a state or perform a transition.

Executable content is executed in the following order (assuming some is defined):

Further details of executable content is covered in the W3C Specification.

The state machine runtime follows the Language Runtime pattern. It takes the SCXML definition as an operator argument and the event to be processed as the event argument. In common with all NetKernel language runtimes it doesn’t hold any state. This may seem particularly ironic for a state machine but of course stateless never means “no state anywhere” it means “no state here” and the state is actually stored (SOURCEd and SINKed) in a resource referenced by the state argument. Here is the documentation boiler plate for the runtime:

As is the way of the day here is the obligatory Hello World example using nCoDE: 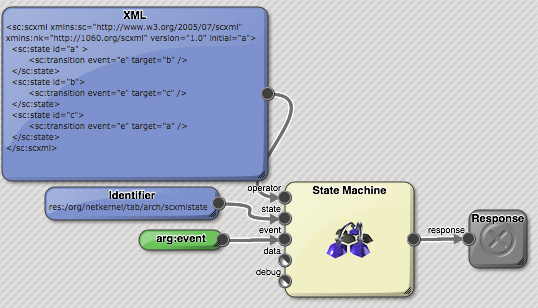 this is mapped to the frontend 8080 HTTP server with the identifier grammar:

Issuing a request of http://localhost:8080/smHello/e will advance the state machine a->b->c->a…. and any other event will not.

In this example we return the output from the state machine which isn’t that interesting as usually you’ll be triggering off sub-requests to do useful work but this is what it looks like:

Hope this post helps demystify how state machines are implemented in NetKernel and don’t forget that if your curious the demo module contains much more exciting stuff, including a full version of the legendary RocHockey (multiplayer air hockey) and a timesheet system that puts at least one major corporations timesheet system to shame.

Thank you to all those who provided feedback on what you’d like to see in a NetKernel IDE Plugin. This is a topic that has been on my mind for a couple of years now as various folks have dabbled with creating one, and as we have observed many development teams and how they use their IDEs to truly integrate all their tools. So the feedback I received was pretty much in consensus in some areas and widely varied in others.
Published Apr 12, 2013  3 min read   netkernel