I think it was the final episode in season 3 of Black Mirror that motivated me to start thinking about building a drone again. That episode - Hated in the Nation - involved swarms of autonomous drones deployed across the UK to replace recently deceased bee colonies.

In this work of fiction the drones wreak havoc. However the connecting of computation and AI to real moving entities in our world really intrigued me.

Although my ambitions are not so great, at least initially(!) I started to investigate possible platforms for building a drone which could be used as the basis for connecting sensors too and connecting back to a central hub.

I found some tantalising glimpses of researchers connecting ranging sensors to allow a drone to move around without crashing into both static and moving obstacles. This tantalising TED talk entitled The astounding athletic power of quadcopters by Raffaello D’Andrea shows some amazing engineering combining sensor inputs and sophisticated mathematical modelling to create creepily amazing behaviours:

As I started to investigate what I’d need to buy to construct the drone I discovered a whole world of choices. I looked at what complete products were available and what components you could buy. I also found numerous software platforms. There are lots of good guides to starting off building drones but the common theme in all of these is that you follow a pretty similar pattern: You build a vehicle that is controlled via an RC controller and/or a laptop based flight planner.

The available choices for hardware are particularly staggering. It is very difficult to know where to start. Different components have different connectivities and limitations. For example: 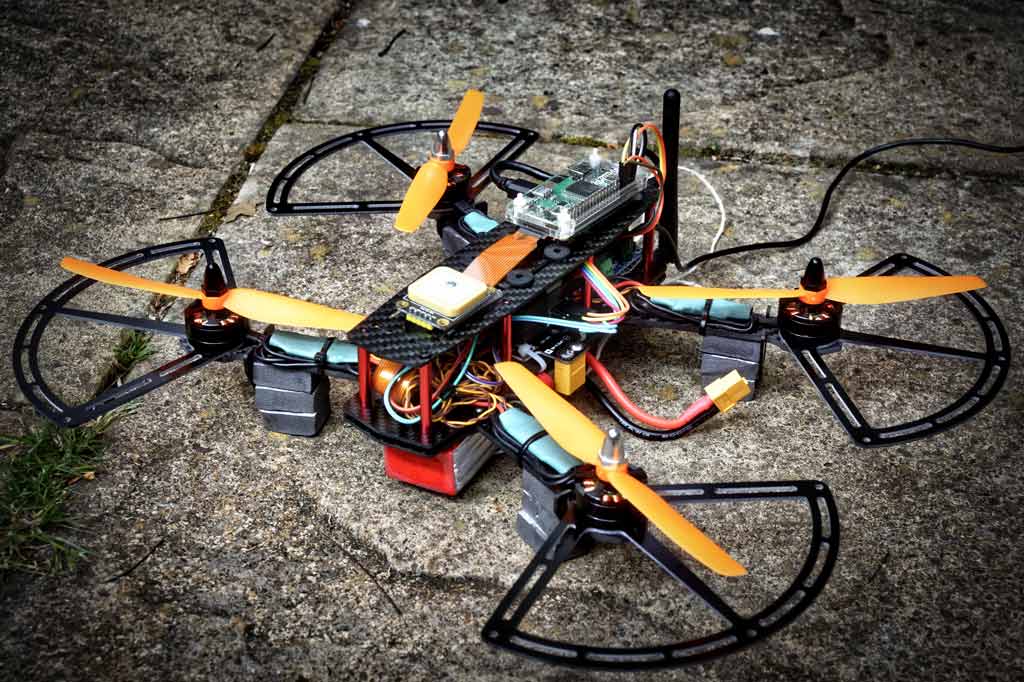 This post is just and introduction to my explorations. There is so much detail in this project - much more than I anticipated at the outset. After a number of dead-ends and backtracking I’m now at a stage where I’m pretty confident I have the basis for future work with a solid and extensible drone platform. Today i’ll finish with some initial hardware block diagrams:

- a self contained photo frame connecting to an RSS feed

This project builds a self-contained photo frame using a Raspberry Pi Zero and an old monitor. (Old monitors are better as the 4:3 ratio suits a mix of vertical and horizontal oriented photos better than a 16:9 ratio.) Figure 1: Finished Frame on wall Hardware Parts List Raspberry Pi Zero with micro SD containing Raspbian Power supply for Pi (see below) USB WIFI dongle VGA computer monitor VESA wall mount Custom made photo frame to fit monitor HDMI to VGA adaptor I had a photo frame made by a framing shop with the inner dimensions of the monitor.
Published Jan 25, 2017  4 min read   internet of things · graphics

- building a radar speed gun with a Raspberry Pi

Background This post is a follow-up from my previous post Building Radar Speed Camera and Traffic Logger with more information, improved design and experience from using the device in the field for nearly 2 years. This project is a self contained speed radar that can be used to give realtime traffic speeds, log traffic flows and statistics over a period of time and also possibly capture speeds of other objects in sporting environments, for example, though I haven’t specifically tested and tuned the code for this.
Published Dec 28, 2016  5 min read   internet of things · sensors

- How to bypass and replace power regulator on Particle Photon

I accidentally shorted the 3.3v pin in the Particle Photon with ground. Within a second a puff of smoke rose from the circuit board and the photon no longer worked - when I connected power nothing happened, no LEDs lit and no boot. After a little looking around I discovered that the problem was likely the regulator which lowers the USB input voltage VIN down to 3.3V which all arduino like platforms use.
Published Dec 21, 2016  1 min read   internet of things