Listening to the people I’ve spoken to this week then a picture may not be worth a thousand words. But those folks tend to prefer the command line over the GUI. If you’re in that camp you know where the source code to NetKernel is and you’ve probably read it. This post is for the rest.

Following on from Essence of ROC I’ve decided to do a series of concept maps of the ROC principles. Concept maps are pretty good at visually showing relationships between concepts. In fact they seem pretty close to RDF when represented as a set of proposition triples. Each concept is shown as a rounded box with the concepts name centred within it. Connecting between the concepts are linking phrases. These can be anything that makes sense within the domain. Unlike UML and more structured modelling languages there are no rules.

So first let’s look at a map that is based on the concepts we explored earlier in Essence of ROC. We ask the question “What is a resource?” and this forms the centre of our map with resource highlighted in orange.

We can see that this visual representation is pretty compact and although it potentially fails to capture some of the fine detail it gives a clearer high-level view. Of course we could add extra fine concepts to the map but that might hinder more than it helps. So my tendency will be to present a clear concept map and a minimal associated prose to fill in a few blanks if necessary. It might be nice to have little comment boxes like UML and nCoDE but unfortunately the tool I’ve been using doesn’t support them.

Compare this map to the mentioned principles with their associated proposition triples. (The observant of you will note that I’ve dropped the last principle about transreptors; thank you for those who pointed out it that it might be better left off, with hindsight I realise you were right because the concept of transreptors much better fits into the subsequent section.)

Exploring the types of Endpoint Now we have the foundation as a concept map, I want to push forward and add in some more of the concepts. First up let us explore some of the variants of endpoint: 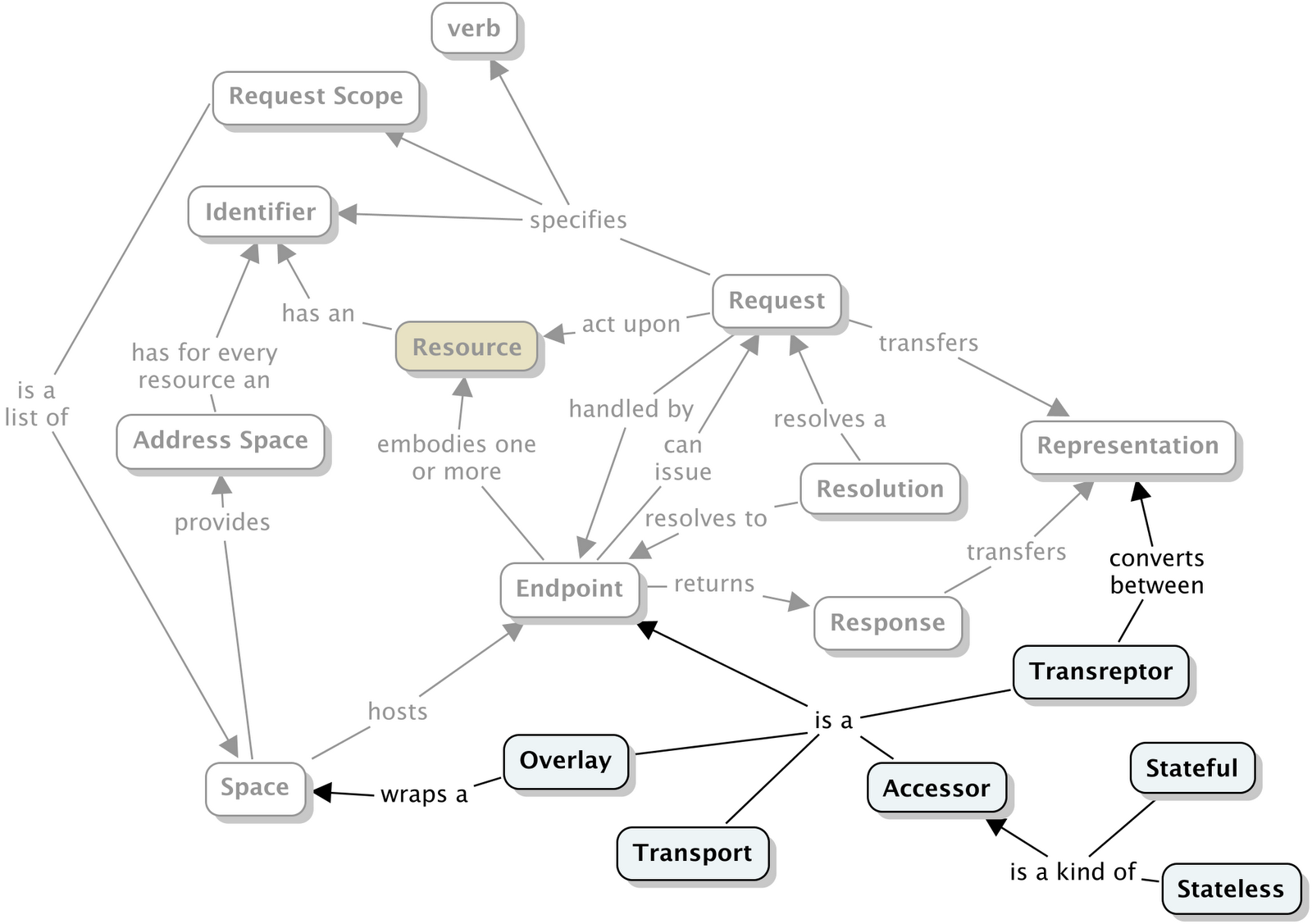 Endpoints come in four varieties, Overlays, Transports, Accessors and Transreptors (yes this is where it fits).

Overlays wrap a space, as such they manage access to the wrapped space from the host space. Overlays have many uses including implementing a simple import of one space into another.

Transports are endpoints which don’t embody any resources and no requests can resolve to them. What they do is receive events from outside the address space and convert them into requests and issue them into their hosting space.

Accessors, in a sense, are the most obvious of the endpoints. They do directly provide an embodiment of one or more resources. For example a File accessor maps the files within a filesystem to resources within the host space with identifiers starting with “file:” The file accessor resolves SOURCE, SINK, EXISTS and DELETE requests which have a direct effect on the file on the filesystem. The file accessor is an example of a stateful accessor because if models a resource which has state. Stateless accessors typically model transformations or language runtimes. These embody derivative resources which depend upon the state of other resources rather than any state which they directly contain. For example consider the Groovy runtime accessor which has no state but which provides the response from executing a given groovy program. Usually these stateless or service accessors only implement the SOURCE verb.

Minor practicalities of Modularity This section has a couple of concepts (modules and prototypes) relating to the the modularity of systems built around the resource oriented concepts. 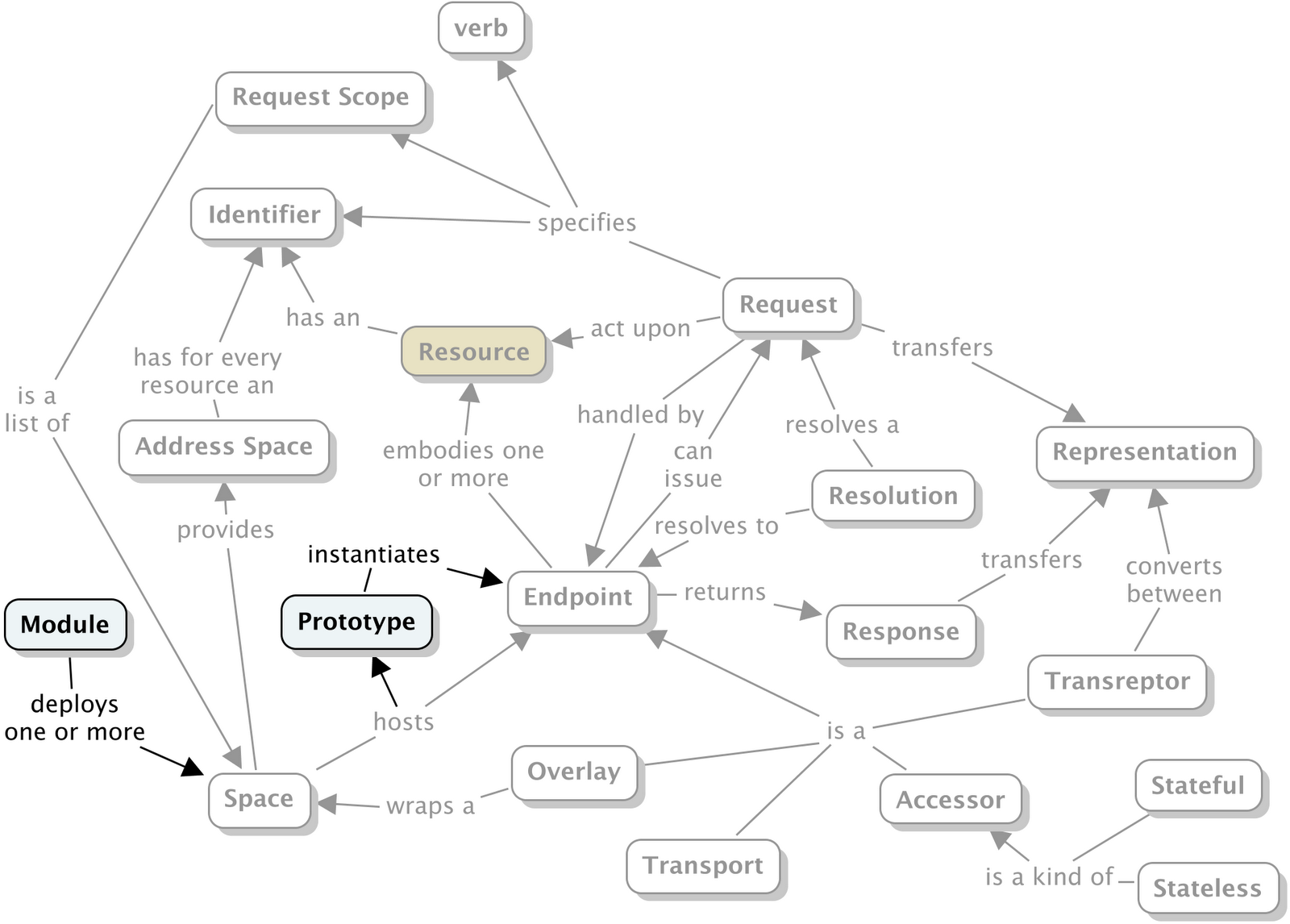 Spaces can host prototypes in addition to endpoints. A prototype exists to allow the creation of new endpoints based on an implementation provided in a library space. It is often necessary to create new endpoint instances rather than simply issue a request to an existing endpoint when the endpoint depends upon it’s location, i.e. an overlay or transport.

So what makes it Tick? This section shows how the kernel at the heart of NetKernel lies a kernel which acts as the intermediary middleware between requests. 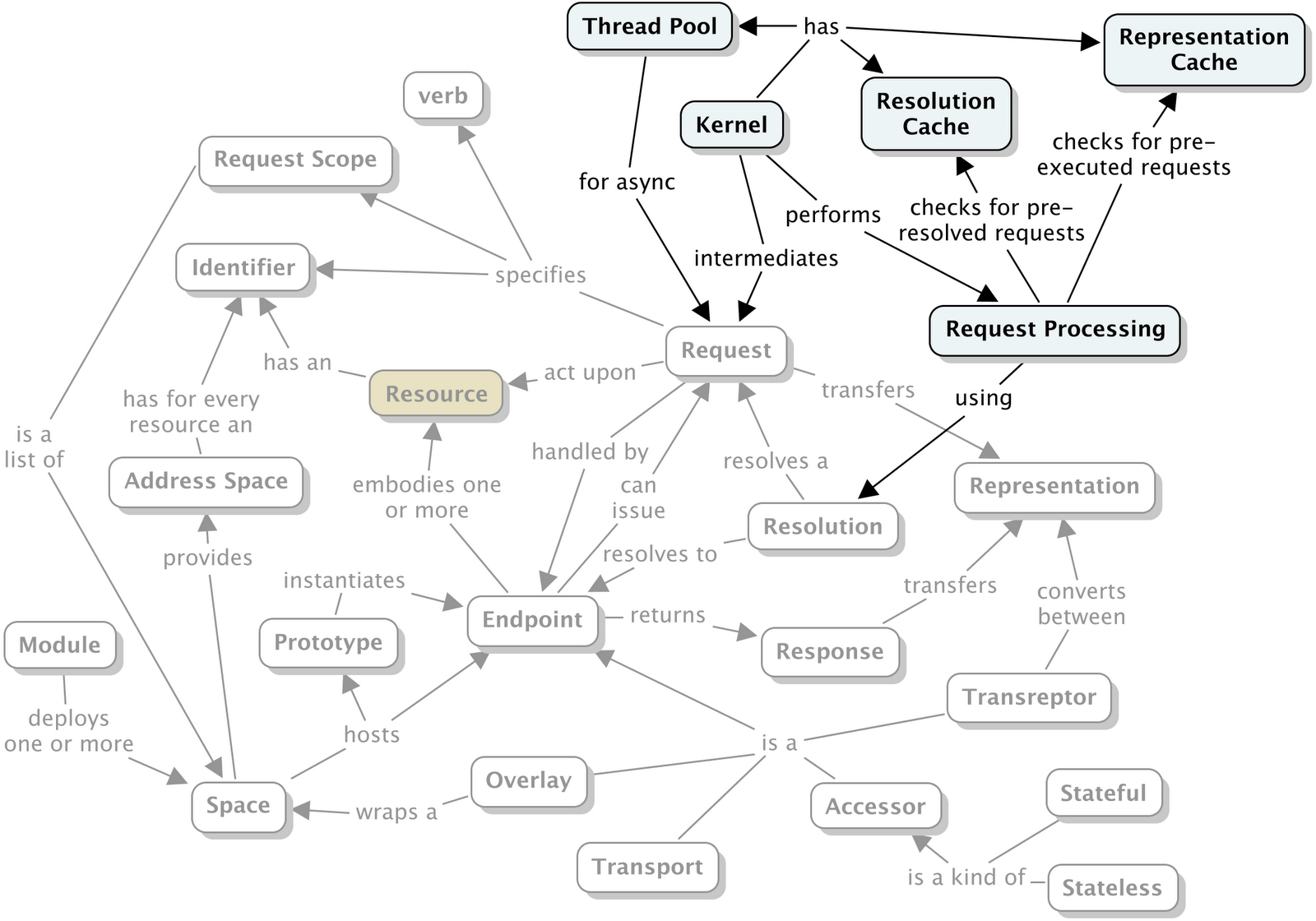 The kernel also enables the implementation of asynchronous requests by handing of a request into a queue that is then serviced by a worker thread pool. This enables the calling endpoint to perform many request concurrently.

Pulling it all together With nothing more to be said, here is the complete concept map covering everything we’ve discussed: 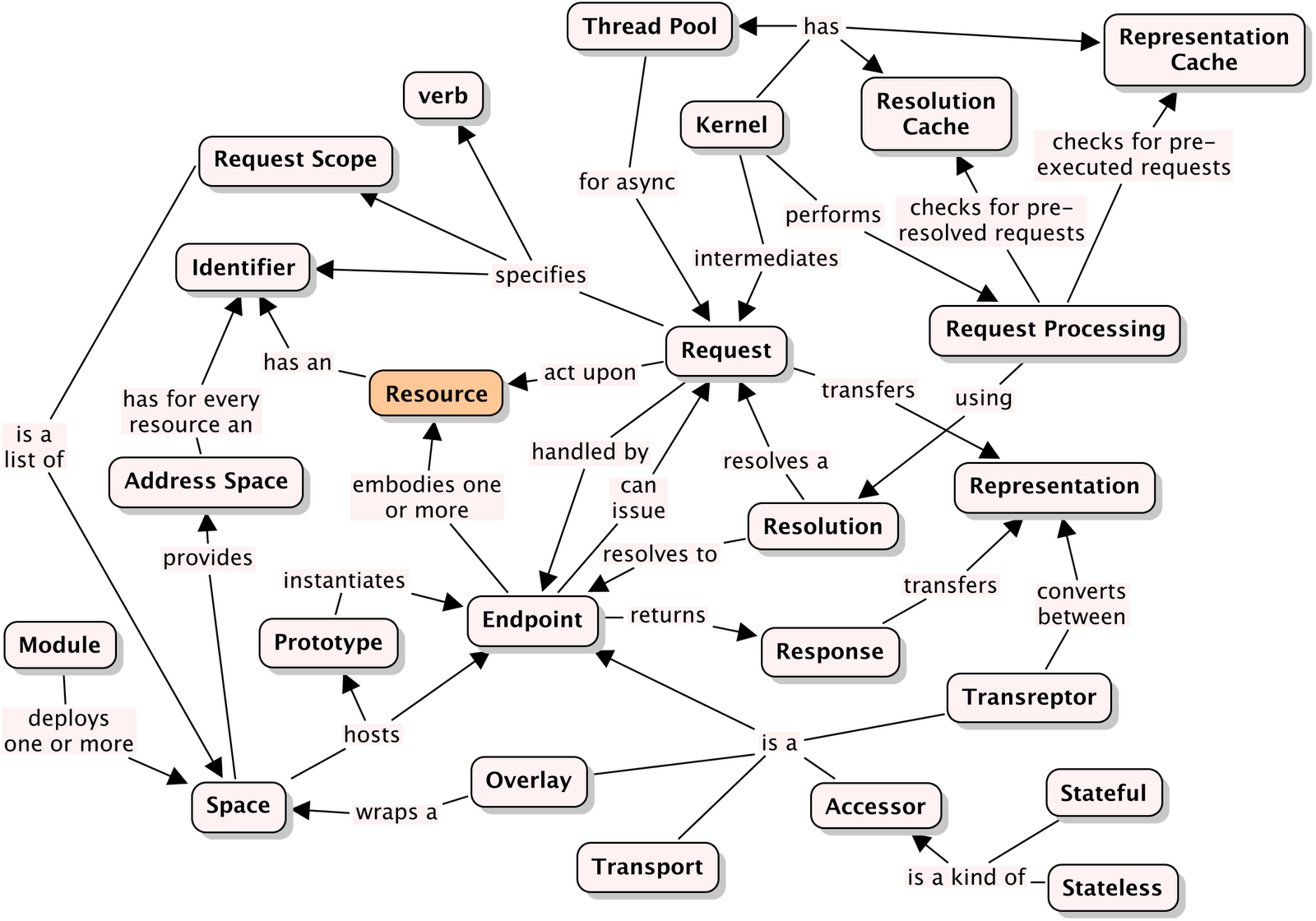 You might well have expected to see this confusing graphic1 to be from the NetKernel page on 1060research.com given the way we appear to be simultaneously teasing visitors with the promise of refreshing cool water of IT nirvana whilst blasting them with either technobable or mind twisting concepts (depending upon your level on cynicism.) This can act as a barrier to all but the persistent. I’ve recently spoken with quite a few people who have persevered and have told me their story, so in this entry I wanted to just reset things a bit and build up the story of what Resource Oriented Computing (ROC) is and why it’s worth the effort to understand.
Published May 25, 2012  4 min read   netkernel · resource oriented computing

One of the enhancements to the ROC abstraction that was introduced with NetKernel 4 was the ability to dynamically inject address spaces into the scope of resource requests. In NetKernel 3 the scope was determined purely from the requestors scope and the resolution path through any space imports to the resolved endpoint. In NetKernel 4 this same basic approach is used but any endpoint can now inject new spaces into the scope before issuing a request.
Published Nov 30, 2010  3 min read   resource oriented computing

We are getting close the first anniversary of the NetKernel 4. With the release of Netkernel 4 finally we had the solid core ROC abstraction that we had always talked about. Along with the core abstraction came a metadata model which we haven’t really talked a lot about. Metadata means a lot of different things to different people so just to be clear, what I’m talking about here is the system state that is generated and captured by the core NetKernel infrastructure of the kernel in combination with standard modules.
Published Oct 12, 2010  4 min read   resource oriented computing